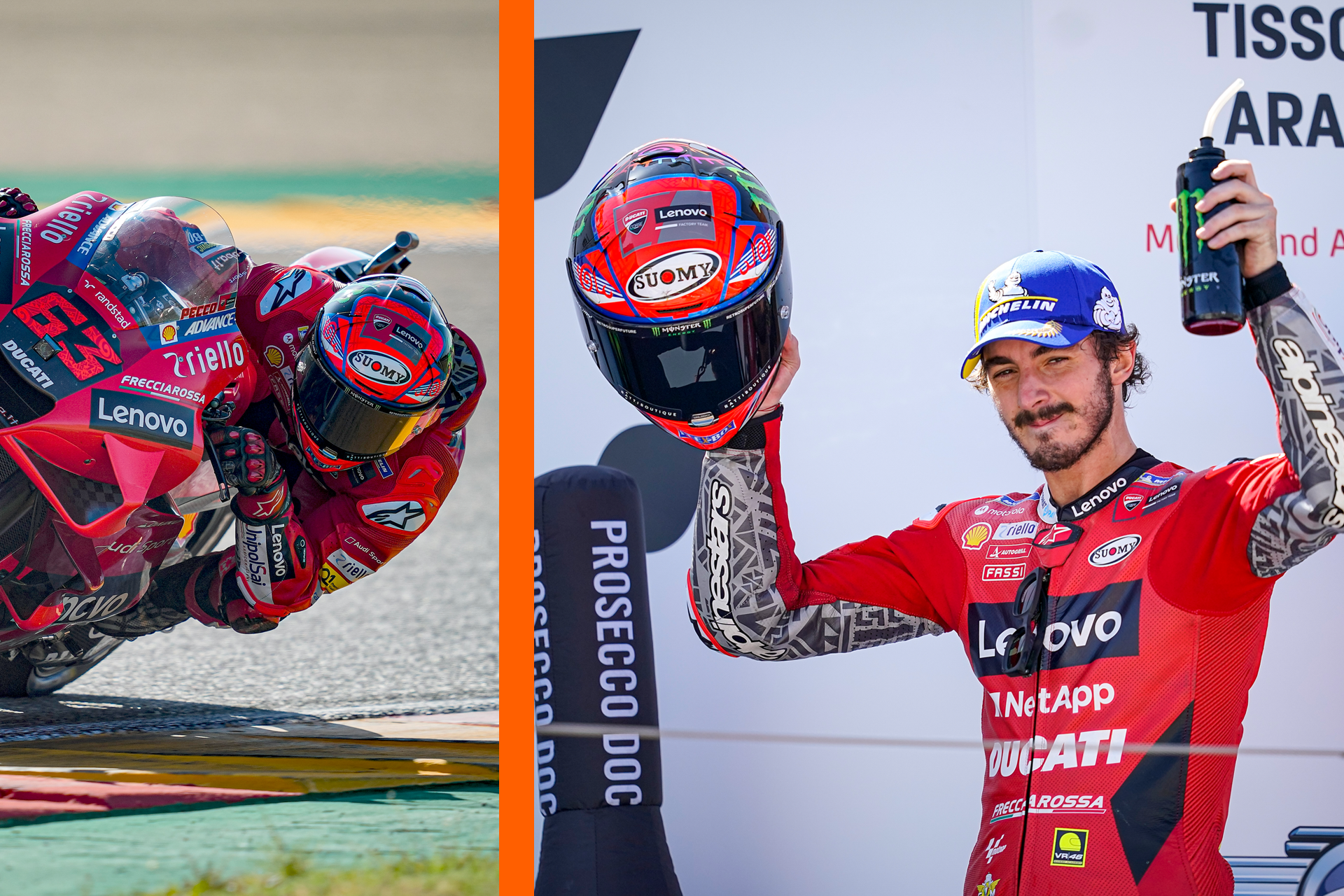 Masterpiece of Francesco Bagnaia in Aragon!
After the pole, improving the previous record by 313 thousandths, Pecco wins the Motorland race following a battle on the last lap, remaining in the lead from start to finish. Congrats!

“Today’s victory was really incredible. We knew we were strong, but also that Marc Márquez is particularly fast on this track. When I took the lead, I tried to push right away because I knew he was behind. The last four laps were tough, and I couldn’t wait for the race to finish because he kept passing me. In the end, we did it, and it is an indescribable emotion. Today’s win was not taken for granted: I came here with lots of questions, as I had never managed to be fast and finish the race in the points since 2019 until now at the MotorLand. Instead, this year, since FP1, everything has been perfect. I’m thrilled.”

Enea Bastianini, who crossed the finish line in a spectacular 6th position, achieved his best race result since his debut in the MotoGP. Enea had an intense fight in the third group of the race, from which he emerged victorious.

“It was a very enjoyable race. At the beginning I struggled in the corners, but from the middle of the race onwards I improved and from then on I started my comeback. It’s a pity that I lost a bit of time fighting with Quartararo and Nakagami, because maybe I could have caught Miller as well. Anyway, it was a race that exceeded my expectations. I think we showed great pace throughout the weekend and we’ll go to Misano in really motivated.”

It was a challenging day for Nicolò Bulega who was having a good race before an issue forced him to an early retirement with five laps to go.

“I was doing a good race; I could have finished 11th and I was even quicker than the guys ahead. But then with five laps left the bike stopped without any apparent reason.”

Romano Fenati, who started from the seventeenth position, was showing a great comeback: unfortunately the fall of G.Rodrigo on the seventh lap stopped him, and, despite having accumulated a large gap, he managed to climb up to the fourteenth position, thus reaching the points area.

“It was not the my best race because Rodrigo crashed in front of me and I had to go long in the gravel. At that point I had to restart the race from the back and I manage to reach the fourteenth position. I am happy because the bike was really performing well. The front grip it wasn’t at its best. but we improved a lot. We will do better next race.”

Click the button below to find out all the images of the #SuomyCrew during the weekend at MotorLand.