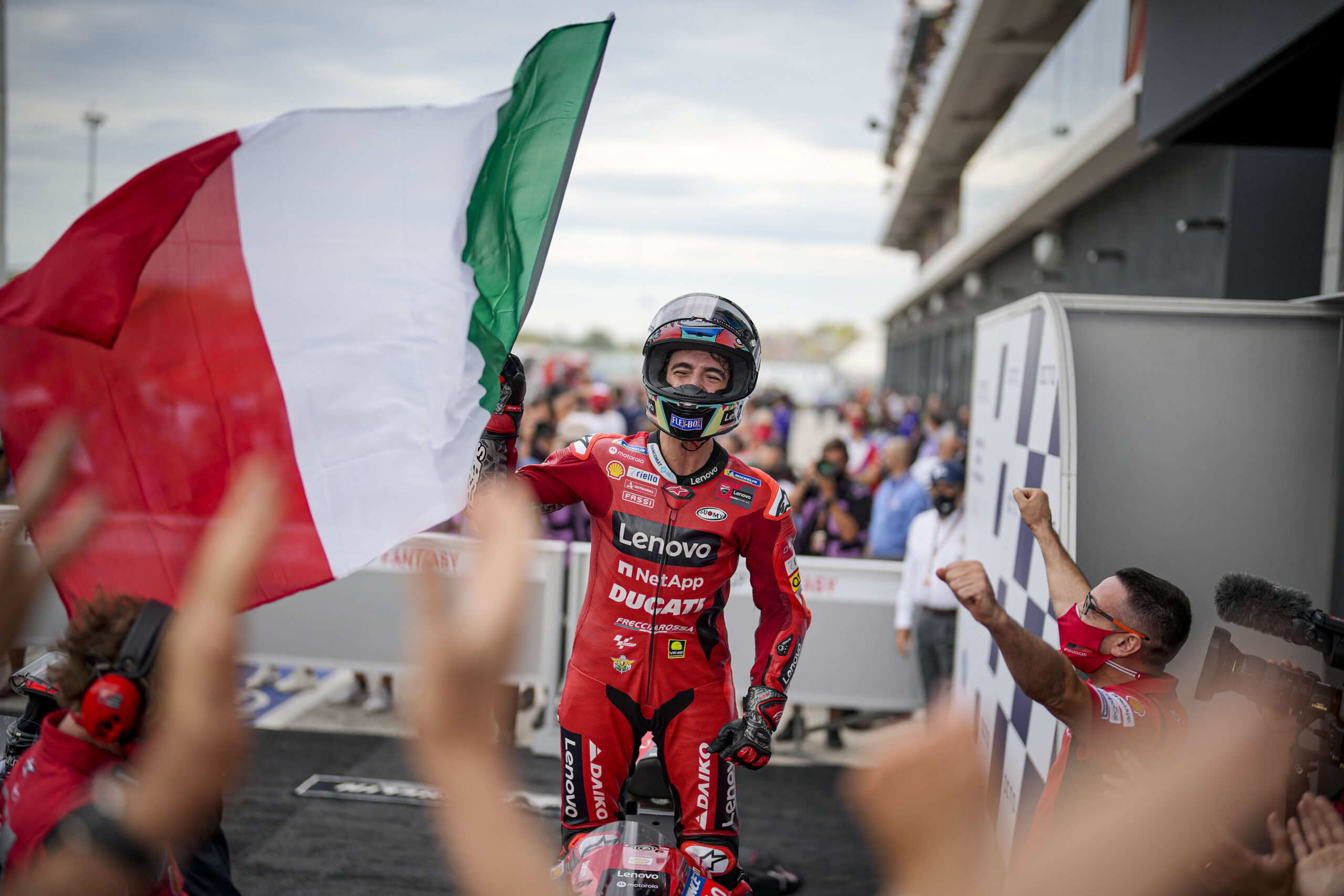 No one as fast as Pecco in Misano! Another perfect weekend for Pecco Bagnaia who triumphs in the GP of San Marino and the Rimini Riviera, obtaining his second consecutive victory in MotoGP. Enea Bastianini, third, conquers his first podium in MotoGP, and Matteo Ferrari in MotoE conquers the first step of the podium!
Dominator of both qualifying and the race, Pecco, who started from pole position, took the lead immediately after the start, dictating a very fast pace and managing in a very short time to gain an advantage of over a second over his direct rivals. From the middle of the race the pace became more and more pressing, but Pecco managed to keep the first position until the finish.

“It was another perfect weekend! It wasn’t an easy race at all: Quartararo was really strong towards the end, but I tried to stay consistent as much as possible. To get another win was important, and to do it here at my home track, in front of so many fans and those who love me, was even more special. Now we won’t have much time to celebrate: Tuesday and Wednesday, we’ll be back on track for two days of testing, but for now, I want to enjoy this success”.

Enea Bastianini conquered his first podium running an amazing race, also setting the historical record for the fastest lap in the race. Starting from 12th position, with a very tight pace, with 8 laps to go, Enea managed to reach third position, keeping it until the finish.

“It was an unexpected result, but from this morning I thought it was possible because I saw that I could easily do good lap times. We managed to find a good set-up on the bike and I enjoyed it. Halfway through the race I was feeling really good and when I overtook Miller, I continued to set my pace. I knew I had Quartararo and Bagnaia in front of me and I wanted to try to attack them, but I was already practically at the limit. I am very happy with this 3rd place and it was fantastic to get this podium in Misano”.”

Only 17th Nicolò Bulega, perhaps also for a not perfectly performing tire.

“The data will probably prove us right… It is very likely that, as in the fp3, once the tires have been changed the performance of the bike has changed a lot. Too bad because in the warm-up I had gone well, lap canceled separately (8th time), I had taken a step to stay in the top 10 quietly and instead in the race we struggled a lot and risked a lot to be fast ”.

Unfortunately, the Grand Prix on the Misano World Circuit ended with a crash by Romano Fenati on lap thirteenth: until then he was dominating the race with a gap of almost 3 seconds from his pursuers. With a time of 1’41.648, on lap five he set the fastest race lap, which also represents the new Best Race Lap of the Misano World Circuit. Unfortunately, on lap thirteenth Romano lost control at turn fifteen.

“I’m disappointed with the crash I went through, but I’m happy because we had an incredible pace and I was the strongest of all the riders. I’m sorry for my team and for all the fans who came here to support me. We will have to have a good race in Austin, trying to replicate the start of the race here in Misano”.

Matteo Ferrari finds victory at the World Circuit Marco Simoncelli in Misano. Definitely a difficult race for Matteo, second at the finish line and then promoted to winner with the penalty inflicted on Aegerter.

“It was a very good race even if it was difficult at the beginning. Unfortunately, I can’t be fast with the new tires, but this time we got off to a good start and there were no problems at Turn 1. From the middle of the race onwards we had the pace to stay ahead. It was tough because there was a lot of wind, but we did well. It has been a difficult season, with no podiums to date, in which this third place overall has a different flavor: it means we never gave up and I have to thank the team for always supporting me ”.
MATTEO FERRARI

Next Round: Grand Prix of the Americas, 3 October

Click the button below to find out all the images of the #SuomyCrew during the weekend at Misano.