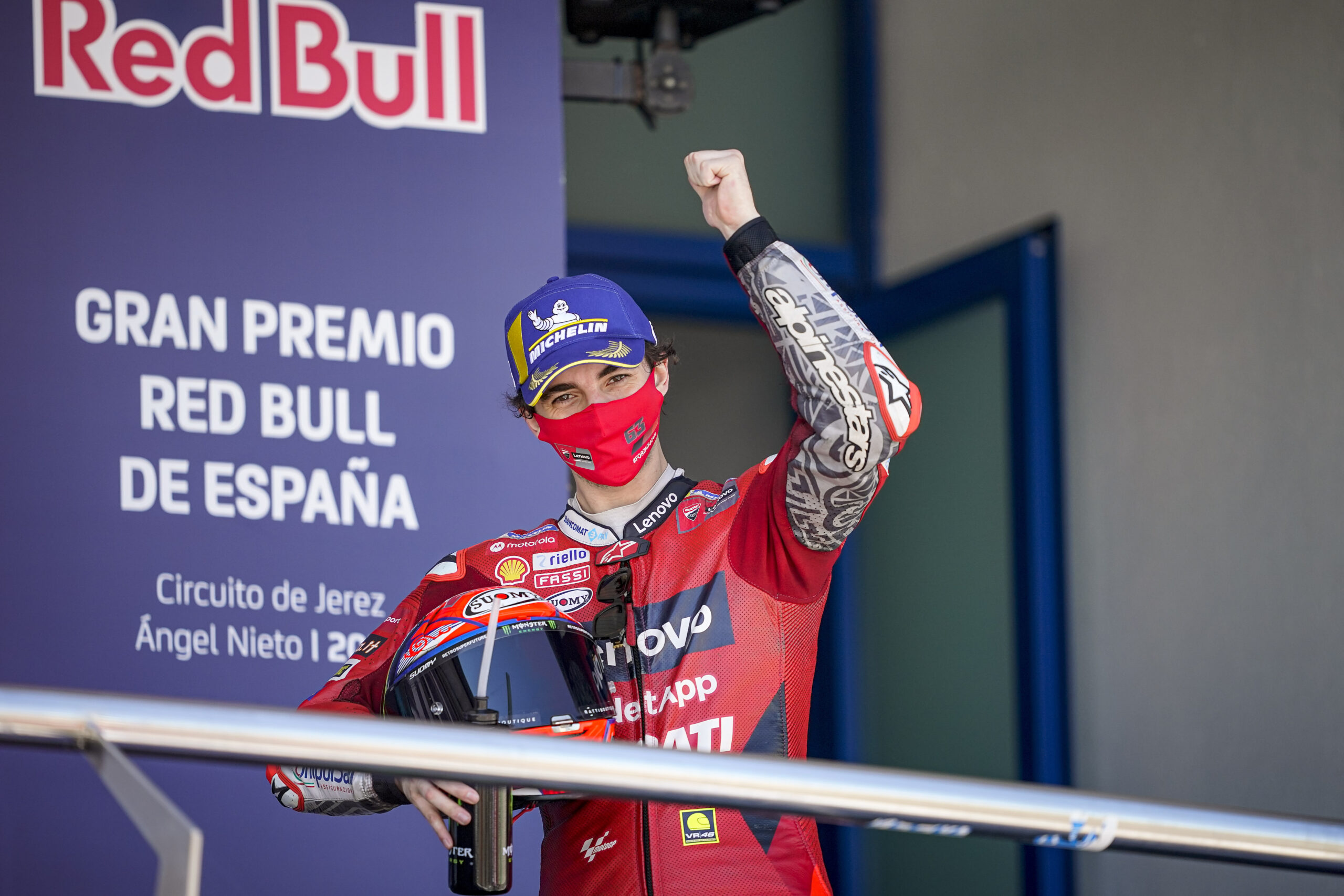 The Jerez circuit, one of the most popular tracks of the MotoGP World Championship, was the spectacular set for a race that saw Francesco Bagnaia reach the second place on the podium.

Pecco made an excellent race: he started with the fourth fastest time from the second row on the grid, and maintaining a constant pace took second place, less than two seconds behind his teammate Miller. Thanks to this exceptional result, Pecco now leads the world ranking. Congratulations!

“Today in the race, I felt really comfortable riding the Desmosedici GP bike, thanks to the great work done with my team over the weekend. I started to push after the first four laps not to stress the rear tyre too much: my pace was good and allowed me to catch up with my opponents and pass them. In the end, I was even catching Jack, but with two laps to go, I preferred to defend the second place. Today’s result is really incredible, and I hope we can continue like this in the next races, which will be held on tracks favourable to our bike. Tomorrow we will have another day of testing, so we have to stay focused.”

Fall without conseguences for Enea Bastianini, who in any case, ran with a good pace, but unfortunately this time he was unable to get in the points.

“I’ve made a bad start, with some problems. I had the pace and good feelings with the brake, after 4 or 5 laps I overtake to Marquez, but I went outside and it has pass me again, behind him I make a time of 38.4, 38.5 so I think little by little I could have improved. It was a shame the fall on Turn 2, I’m sure I could have made a good race. I keep the positive, we’ve been competitive. This morning the feeling with the bike was much better, tomorrow in the tests we will try new solutions.”

Another hard Sunday for Nicolò Bulega in Moto2, out at turn 6 due to a fall fortunately without consequences.

“Unfortunately I lost the front after few laps at turn six and apparently for no reason. We will need to analyse the data to understand what happened, but it’s a shame. It would have been a challenging race anyway given the long lap we had to do, but we were really aiming at enjoying a positive Sunday. Now we need to concentrate on Le Mans.”

Romano Fenati returns to the podium of the MotoGP by winning second place in the Moto3 race. Starting from fifth position, with this podium reaches the fourth position in the world rankings. Congratulations!

“I am very happy with this podium here in Jerez. The bike was perfect and the feeling was very good. I am happy both for me and for my team. Next step is Le Mans, where we have to improve, so that we can make further steps ahead. We have to continue to work on this path.”

Click the button below to find out all the images of the #SuomyCrew during the weekend at Jerez circuit.