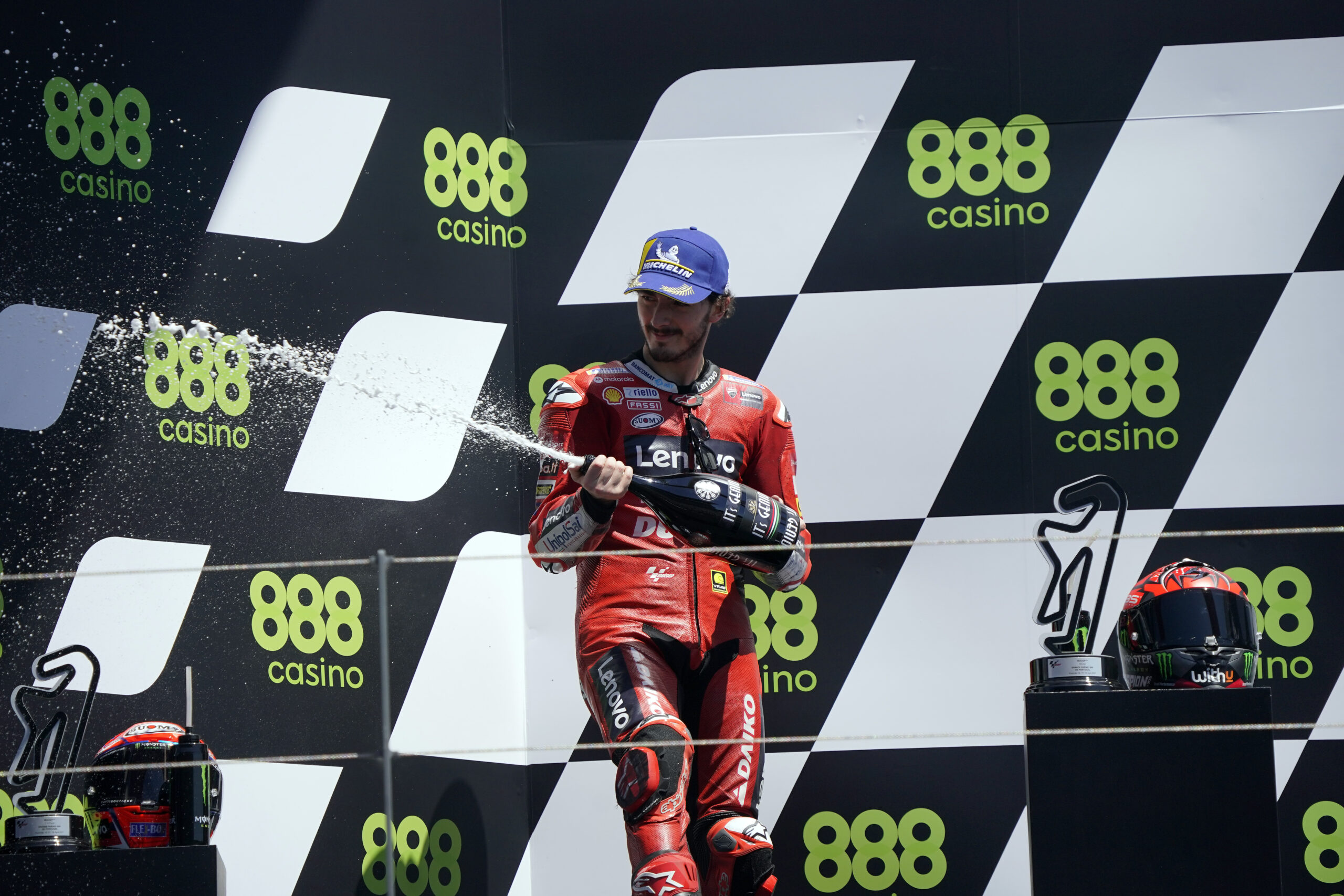 Great show in Portimao, a track that always offers “roller coaster emotions”: a race with duels and courageous comebacks.

Francesco Bagnaia was the protagonist of a thrilling comeback race. Pecco conquered his second podium of the season: forced to start from eleventh position on the grid, after losing the pole in qualifying for scoring the best time under the yellow flag, he overtook his rivals and reached the leading group at seven laps from the end: he finally launched the decisive attack conquering the second place which he maintained until the finish line, also climbing to second position in the general classification.

“I’m delighted with the result in today’s race! As I was starting eleventh, my goal was to finish in the top five, but instead, I managed to get on the podium! Moreover, this was a track where I struggled a lot last season, but this year, my feeling with the bike was incredible and allowed me to make this great comeback. In the last laps, I was suffering a lot, but in the end, I was able to defend second place from Mir’s attacks, and now we are also second in the Championship. I want to thank my team for the great work we have done together this weekend! Now we’ll go to Jerez, another track that I really like.”

Excellent performance for Enea Bastianini, best rookie in MotoGP after the first three races, with a ninth place in the GP and in the world ranking. Starting from the sixteenth position, after a complete comeback race, Enea crossed the finish line in ninth place.

“I’ve had the opportunity to study the other riders, I was late, but I’ve made it. On the last lap I have been the fastest of the grid. I have been able to race the bike in the right way avoiding movement and achieved the best result of the season so far; I am very satisfied with the work we have done. I´m headed to Jerez convinced of our potential and knowing that we can be in the first positions.”

An hard Sunday for Nicolò Bulega out after a few laps following a contact with Celestino Vietti under braking at turn 1. Luckily Nicolò did not suffer any consequences.

“Unfortunately we didn’t find the right feeling with the bike and we struggled a lot under braking. We started off bad but I had a pace to easily be in the top ten. Unfortunately at turn one, which we get to at high speed, I made a mistaked also as I was sucked in by the slipstream when I was overtaking Fabio. I’m sorry I took another rider with me in the process, but it was totally unintentional.”

Seventh place for Romano Fenati, one of the fastest in the race. In fact, Romano set the fourth fastest lap in the race, with a time of 1’47.978.
Starting from tenth position, he was in the leading group for the whole race, obtaining his best lap on the sixteenth lap. Thanks to the points obtained, Romano is tenth in the world rankings.

“I am happy with the overall outcome of the race, because the feeling with bike was very good and the setup was good as well. We lost a little bit of speed and thus we have to work on it for the next grand prix. I feel overall confident and strong.”

Are you ready to expand the challenge with RiMS Ra

Postcards from French MXGP with @benoit_paturel6

Another wonderful pole💪 for @pecco63 and always

From track to road: Track-1 has arrived! Derived