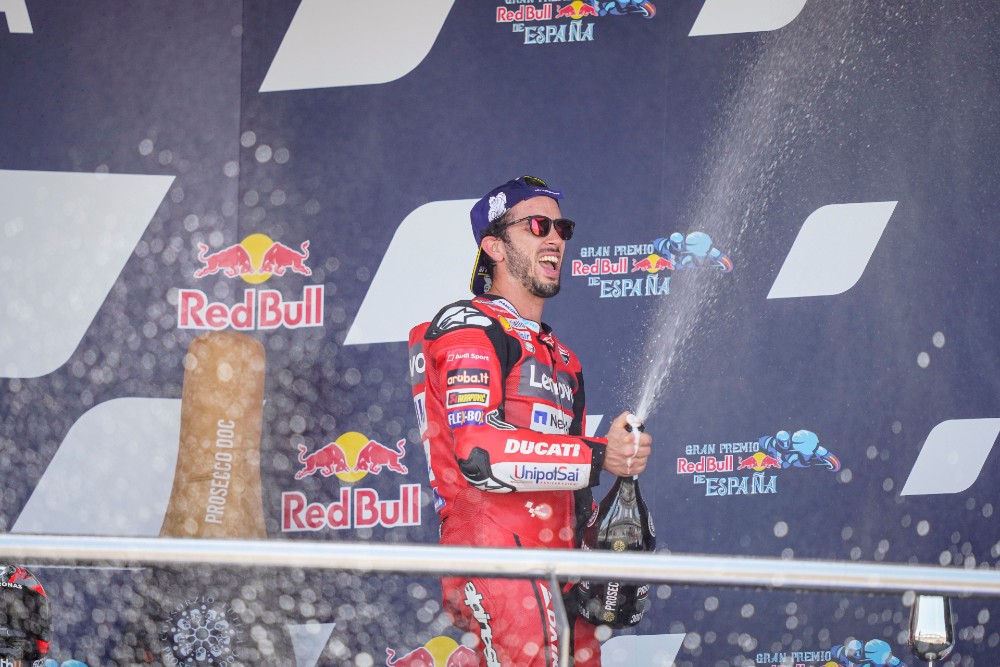 A weekend of celebration, the Spanish one that has just ended.
A little taste of normality with the first race after a long stop which, for Suomy, has also the flavor of the great moments.

SR-GP smelled of champagne just after the first race of this “caliente” Sunday, with the podium of the 2019 MotoE World Champion, Matteo Ferrari.
A hard-fought and decisive second place to start the adventure of this championship with the right foot, trying to defend his title.

“I’m very happy with these first points. Unfortunately I made a small mistake at the beginning of the race which cost me a lot of time. It’s surely a good start, but we can do a little more already next week”.

The second outgoing of the season has been harder than expected for the #SuomyRiders, both in Moto2 and Moto3, who, after the uphill qualifying sessions, were anyway able to put together a good comeback from their starting positions, grabbing some important points.

Enea Bastianini climbed three positions during the twenty laps of the Moto2 race, fully conquering the top ten with a ninth place.

“Tough race: I expected something more. I managed to recover a few positions, but I was fast in some places and slower in others. Next week we’ll work in order to improve and finish in the top five”.

A significant comeback both for Stefano Manzi and Nicolò Bulega, who after struggling yesterday in qualifying, achieving respectively the 23rd and 20th position, were able to reach the points zone bringing home an eleventh and a fourteenth place.

“I’m very happy with how the day went. During the race I made a good start and set a good pace and towards the end I was able to improve further and gain several positions. Next weekend we will still be here and we hope to start from this position to have an even better race”.

“The race was not among the best but to be scoring a couple of points at the end of a very complicated race weekends was not so bad. There’s a lot of work to do but we know what direction to take”.

Romano Fenati‘s race, our standard bearer in Moto3, was marked by a small mistake that forced him to lose the contact with the leading group.
Romano managed to get back into the race, reaching the first three points of the season.

“Today it was not the race that i have worked for but i am sure that we will try to do our best in the next weekend race. Personally i need to work on the braking in order to avoid the over use of the clutch”.

Amazing emotions arrived from the MotoGP talents. Brilliant qualifying for Pecco Bagnaia, who was one of the main actor of a great Q2 that gave him a direct access to the second row.
Andrea Dovizioso, despite a more difficult session, qualified in eighth position.
Pecco knew he could achieve a good result and, for a while, he was able to hold the pace of the leading group. Suddenly, an unexpected drop in the tire forced him to lose positions. Bagnaia finished in 7th position. A positive result which however leaves a bitter taste in the mouth of the Italian rider.
Dovi, from his side, hid himself for the first part of the race, studied his opponents. Fourth toward the end of the race, Andrea was able to fill in the gap with the fighters for the podium, claiming  a beautiful and important third place, that represents his best result in the premier class at Jerez Circuit.

At the end of this magical day, SR-GP is still there, on the podium, and it still having the flavor of champagne.

“This podium is like a victory for me. It was a challenging race, and I didn’t think I could get this result, but luckily I didn’t give up until the end and managed not to make any mistakes.
Surely, thanks to the feedback of this race, we will be able to be more competitive in the next GP, which will be held again here in Jerez”.

“I’m satisfied for the great work done with my team this weekend and also for the big step in front that I made.
I was in top5 for 15 laps and last year I never ride a race like this.
Next weekend we will have an advantage because we already know the tires for the race and I can focus and improve the rest”.

Click the button below to find out all the images of the #SuomyCrew during the weekend at Jerez de la Frontera circuit.