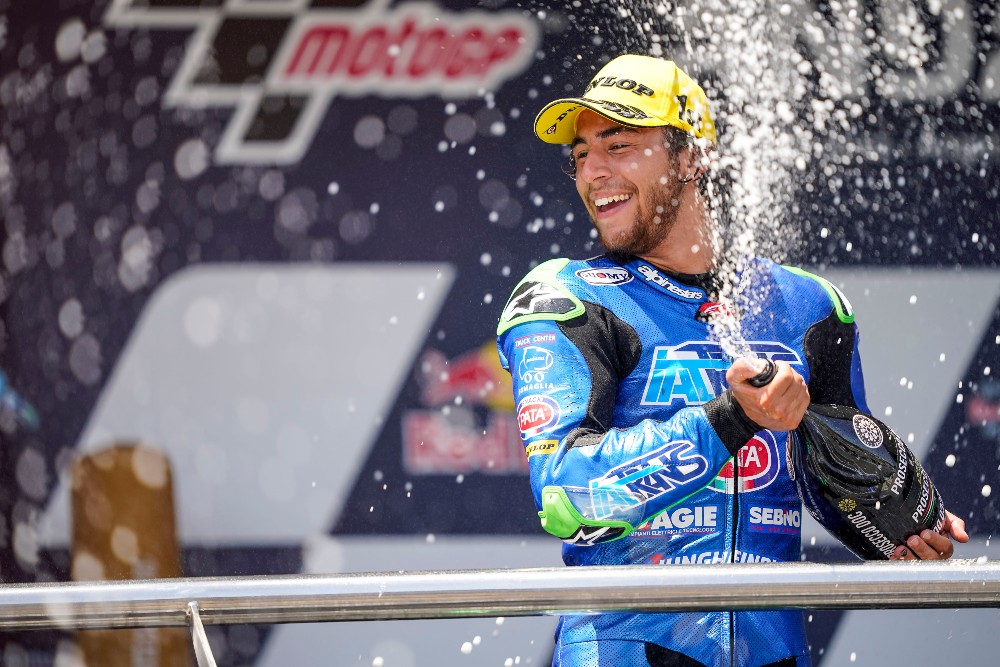 Second back to back round for the talents both of the MotoGP and MotoE World Championship at Jerez de la Frontera.
A weekend started with our #SuomyRiders in great shape, capable of giving us amazing emotions since the qualifying practices, during which SR-GP entered at the parc fermé of three different categories.

An incredible feeling seeing Pecco Bagnaia for the first time among “the big” in MotoGP: he ended the Saturday achieving the first front row of his career in the premier class with a well-deserved third place.
Andrea Dovizioso was a little more delayed and, after struggling during all the practice sessions to find the right feeling with his bike, he ended up starting from the fourteenth position on the grid.

When the red light went out, both our talents made a good start, managing to quickly recover some positions.
Pecco, after a few laps, achieved the second position continuing, sector after sector, to gain a good detachment from the other riders.
With five laps to go, when the podium started to become reality, a technical issue on his bike forced the young rider to a bitter retirement.

“I can’t complain after a weekend like this. We worked really well, we were fast and really competitive. Unfortunately a technical problem didn’t allow us to finish the race but we will arrive to Brno more stronger than ever”.
FRANCESCO BAGNAIA

Dovi, just after three laps, moved to ninth place, handling well the situation avoiding mistakes that could have compromised his race.
Sixth just a few laps from the end, Andrea was able to retain the position until the finish line, scoring valuable points in terms of the championship.

ANDREA DOVIZIOSO
“It’s been a tough two weeks for us here in Jerez, but the good thing is that they have allowed us to gather useful information that we can analyze for the future. This morning we managed to find a good rhythm in the warm-up, but the conditions this afternoon were different. Also, in the race, I had a problem that I’d never had before during the weekend: in the middle of the corner, as soon as I let go of the brakes, I couldn’t feel the front, and it was like that from the first laps of the race.
That’s why I couldn’t force too much, and I preferred to stay in the position I was without taking any risks. Surely if I had started closer to the front, I could have done better.
Now we will have to be good at interpreting all the inputs received in these two weeks to prepare well for the race weekend in Brno”.

A good comeback characterized the race of Romano Fenati who, starting from the 22nd position of the Moto3 grid and thanks to a series of overtaking, moved under the checkered flag in twelfth place.

ROMANO FENATI
“I am not happy with the position that I have reached but i am happy setup of the bike, because we have improved a lot from yesterday. It is important the improvement that we got, because now we will face two races where it will be crucial to brake hard and do some good overtaking. It is not easy to always understand the correct path to take, but i think that at moment we have taken the right path”.

The Moto2 has been (literally) dominated by Enea Bastianini. Starting from the front row of the grid with the third best time set yesterday at the end of an excellent qualifying session, Enea immediately took the lead of the race, maintaining the first position until the checkered flag. He pushed from the start and with his amazing pace, he was able to achieve an outstanding performance.

Thanks to Enea, SR-GP has been celebrated on the podium for the first time on the top step of the podium in this season.

“What a victory! I’m so happy. This morning in the warm up I was fast and in race I gave my best from the start because I knew I could win. I pushed from the first lap and in the last few I kept the advantage over Marini. Thanks to the team for the great job!”.
ENEA BASTIANINI

Positive races also both for Stefano Manzi and Nicolò Bulega, who finished the third round of the season on the top-15 finish, respectively in ninth and twelfth place, improving their performance of last week.

STEFANO MANZI
“I’m pretty happy with the day, but I can’t say I’m happy at all. We got off to a good start this morning and I had a good session with a good pace and we were faster than last weekend and that is already positive. In the afternoon with the heat, although we tried different solutions, apart from the first laps I was not able to establish a good feeling with the used tire. Now we will definitely work with the team to find the best solution to be faster tomorrow”.

NICOLO’ BULEGA
“We can’t be happy because our goals were and have to be higher. Some points are always welcome but I repeat, we must work hard in order to be near the front and battle for honour. Now we have some days off but then it’s all about Brno, which is a track I like a lot.”

The MotoE race has started with great expectations, with our Matteo Ferrari starting from second position.
However during the race fighting for the first position, an ambitious attempt to overtake the rival has sent the current title holder in the gravel, forcing him to retire.
Due to this incident, the race direction also inflicted a three-position penalty to Ferrari for the next race which, for the MotoE, will take place at Misano Circuit.

MATTEO FERRARI
“I’m really sorry, especially because we’re now far from the top. I tried so that I could make up some positions but unfortunately I hit a rider in front of me.I could have saved the crash without the collision, but things didn’t go this way. Now we need to keep our heads down, work hard and I’m sure we can still turn things around in this series.”

Click the button below to find out all the images of the #SuomyCrew during the weekend at Jerez de la Frontera circuit.