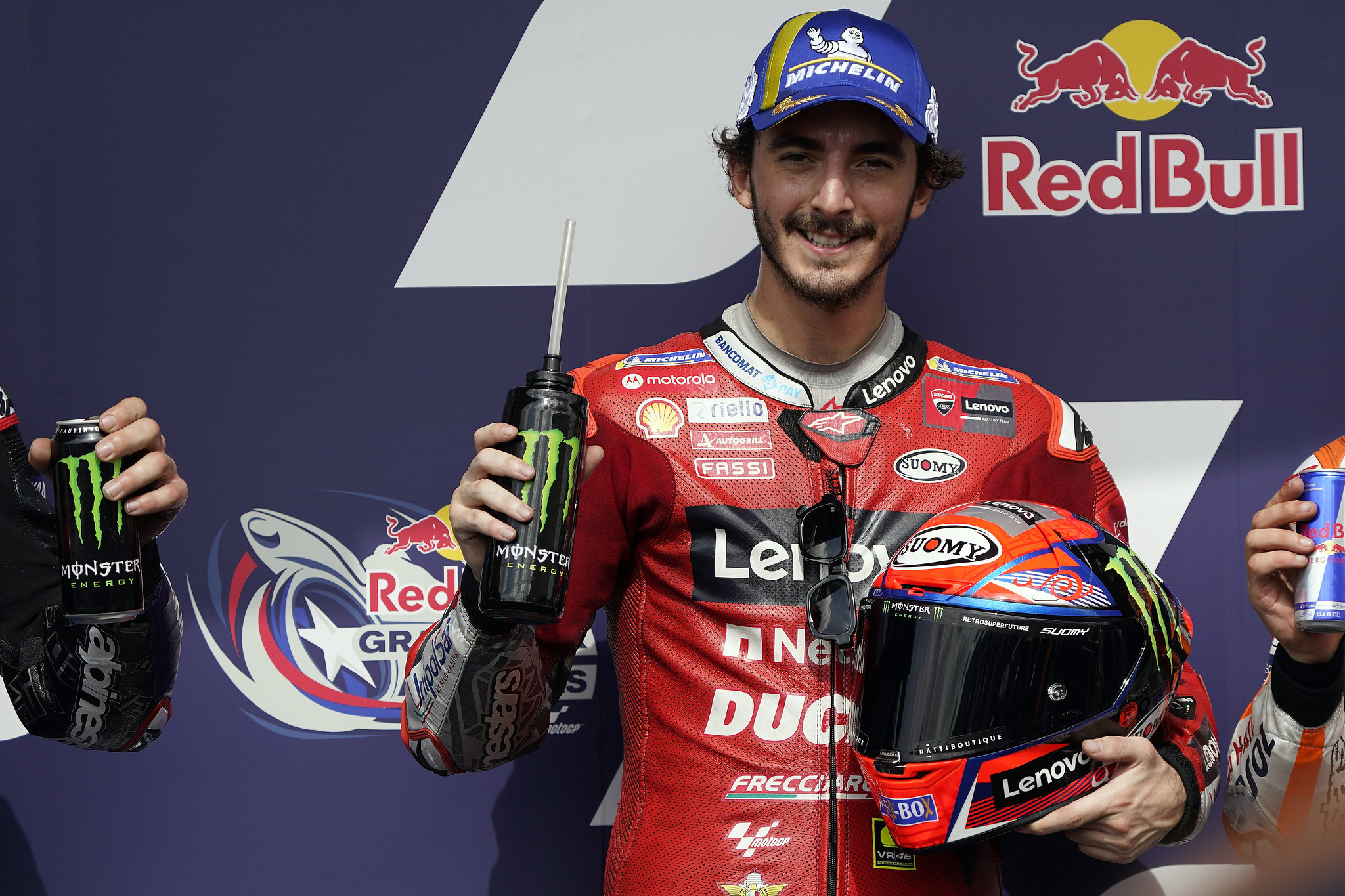 Another podium for Pecco Bagnaia in the GP of the Americas!!! Starting from pole position, Pecco was relegated to fifth position after a few laps, and therefore had to recover ground to return to the fight for the podium, thus conquering third place: after this race Pecco remains in second position in the general classification.

“Today, we couldn’t do more than this. We gave our best until the end and took another important podium, so we can only be satisfied. Right from the start, it was a complicated weekend for us, given the track conditions, but we still managed to get a great result. I also have to thank Jack because he let me through when he was in trouble, and I had to make one overtake less.  For sure, we lost some points today to Quartararo, and now the Championship fight is getting tough, but I’m not too worried about it. We’re working well and improving race by race. Now we’re already thinking about the next Grand Prix where, of course, we’ll try again.”

Enea Bastianini made a remarkable comeback: starting from sixteenth he managed to recover positions thanks to an excellent pace, closing the race sixth.

“It was another unexpected result. Yesterday we had a difficult day, but we knew that our potential on this track was quite high. I had a good race, and in the first laps I tried to recover some positions. I didn’t know if I would arrive to the end of the race, because I went to the maximum and it’s a really tough track. On the last lap I managed to overtake Mir and Miller and it was a lot of fun. We knew we could fight for the top 10, but we didn’t expect to get this 6th. Another great result and we will try to keep it going.”

Unfortunately Nicolò Bulega in this Grand Prix of the Americas has been declared unfit to ride following a crash during FP3 at turn six, from which he escaped with a big leg bruise.

The Moto3 race was interrupted twice and the second suspension was caused by an accident, in which four riders were involved, who fortunately did not suffer serious consequences.
Romano Fenati started from the eleventh position, and lap after lap he managed to climb up reducing the gap with the front group, but his comeback ended on the eighth lap, due to the exposure of the red flag, while the order of valid finish was the one relating to the seventh lap. At that time Romano was twelfth.

“I am not satisfied with the outcome of the race, because we did not find a good set up of the bike, even if at the end of the first race the bike was doing better lap after lap, considering that the main problem was caused by the grip which was too much. After the red flag in the restart I lost some meters from the leading group. I think that this race was unbelievable, since the Moto3 it does not reach very high speed, therefore in theory it is not that dangerous, but if pilots behave like this it becomes very very dangerous. We are experiencing a difficult period, so we must return to race with greater attention. Some pilots are a little bit dangerous and I strongly believe that they must be penalize, to understand their mistakes.”

Click the button below to find out all the images of the #SuomyCrew during the weekend at Austin.