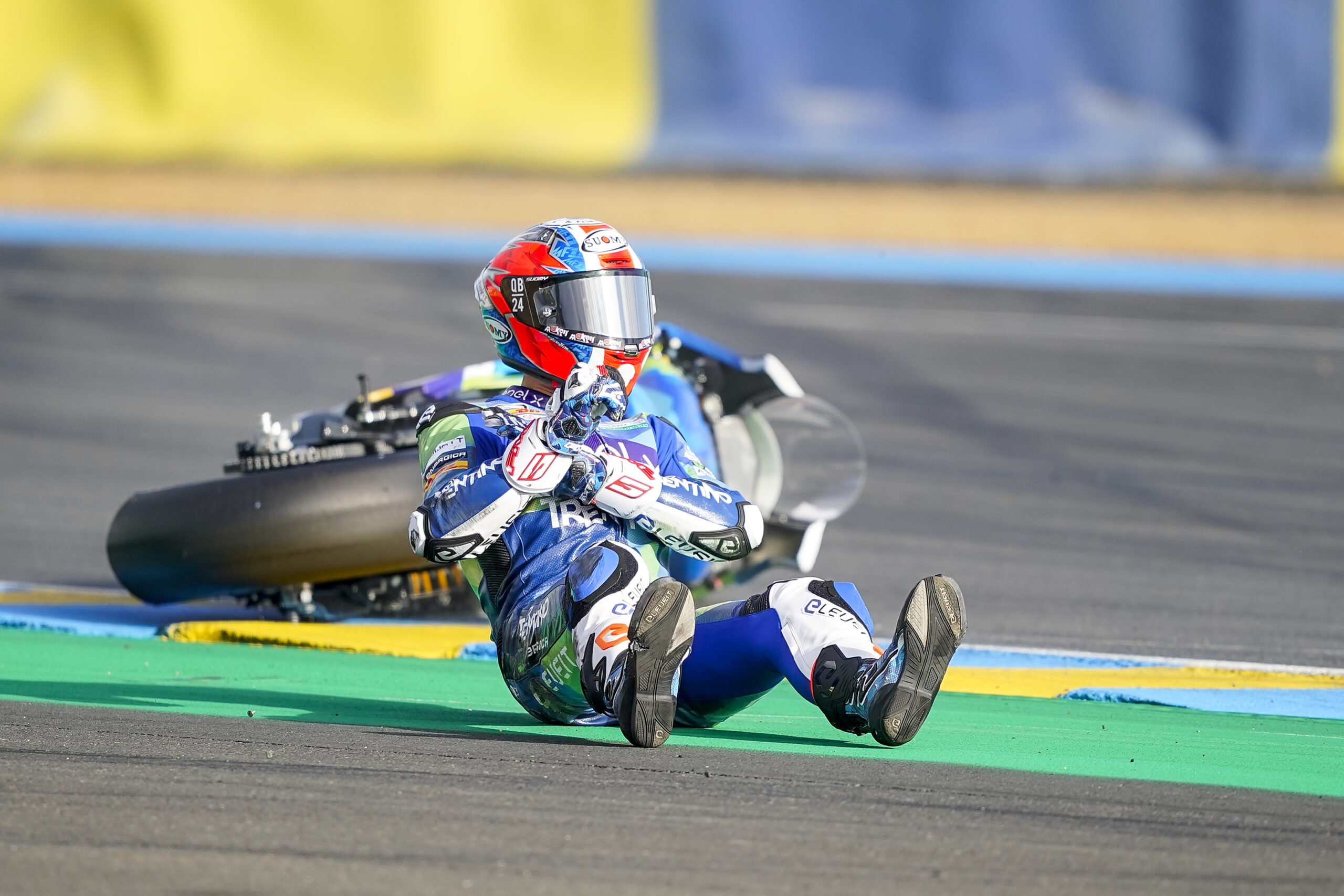 The iconic and beautiful track of Le Mans does not bring much luck to our #SuomyRiders engaged in the French stage of the MotoGP World Championship.

The day begins immediately uphill, with an unlucky Romano Fenati who finds himself out of the game of the Moto3 race with fifteen laps to go, due to a mistake made by his teammate that forces him to retire.

ROMANO FENATI
“It was not a lucky race. The bike was really good and the feeling with it was amazing, but in the end we crashed. I do not, know but for sure Alonso made the mistake to brake too late. Luckily there are other races, so we will do better next time.”

The MotoGP race is postponed after the rain has started to fall just while all the riders are lined up on the starting grid. With the rain that shuffles the cards, the riders have to quickly find their concentration and go back to the set up, even mental one, used during the only wet practice session on Friday.

Dovi and Pecco get off from the sixth and seventh spot on the grid.

Bagnaia remains a bit delayed, establishing himself around the twentieth position. However, lap after lap, Pecco manages to build a good comeback that takes him up to thirteenth place.

FRANCESCO BAGNAIA
“I am not very happy, after the first corner I found myself last and afterwards it was really complicated to recover during the race. I still managed to overtake, the pace was fast but from the position I was in it was impossible to do better. From this weekend I have however learned a lot and next time we will do better”.

Dovizioso, on his side, is able to make a good start and immediately fits into the leading group. A thrilling race: the mix of wet track and breathtaking overtaking don’t leave time to let the guard down. Dovi is fighting for the win when, after suffering from the tyre wear, he is forced, during the final stages, into the fourth place where he finishes the race.

“I’m a bit disappointed because today I thought I could get a better result. Danilo was very fast, and he was riding really well. I managed to stay with him for most of the race, but at the end maybe, we paid for a wrong tyre choice. I was riding with soft tyre both at the front and the rear, and in the last laps, I couldn’t turn the bike properly. In these conditions, it is always difficult to make the correct choice, because you never know if the track will remain completely wet or if it will start to dry up in the end. Anyway, today we earned valuable points for the championship, and I am happy for Danilo’s victory. Now we’re already focusing on the next race in Aragón.”

Although the Moto2 race is also declared a “Wet Race”, all the riders decide to start with dry tires.
Bastianini and Manzi fight for the whole race to gain a top-15 results.
The #FranchGP doesn’t show their level, but they are able to achieve their goal finishing respectively in ninth and fourteenth place.
At the end of the GP, the race commision communicated a 3-second penalty for Bastianini, for a late tyre change prior to the race. Despite having been knocked back into the eleventh place, Enea  remains second in the overall ranking , as he closes the gap to 15 points.

ENEA BASTIANINI
“Tough race. Unfortunately, I had problems with the brakes and I take a penalty because of a mistake. It’s a pity: the final position is not bad, but I’m not satisfied”.

STEFANO MANZI
“After a good warm up this morning, the race turned to be unpredictable. The weather and the track’s conditions played a role for sure, but I spent too much time trying to find the pace and the right feeling with the bike. I should got there a little earlier. I expected more from the race, especially after the good results from the weekend so far, but that’s all right. Now we’ll work with the team for doing better next time”.

Nicolò Bulega is forced to retire, while he was riding in 22nd place.

NICOLO’ BULEGA
“A really difficult weekend, from Friday to today. We struggled a lot and we need to reset as quick as possible and start on the right foot at Aragon in a few days’ time. There are no excuses, we must stay focused and work even harder: the next two races will be very important and we’ll have time to find the best set-up for the Kalex machine.”

Matteo Ferrari’s 2020 MotoE campaign draws to a close with a flash of pride in yesterday’s second and final race. Last year’s title winner put together a great comeback from 15th to 5th, which allows him to achieve the second place in the world standings.
The expectations and hopes at the start of the weekend were very different, but Saturday’s crash proved to be impossible to recover for Matteo, who did a great job in staying focused and finding what was a great result nevertheless.
Thank you for fighting till the last corner.

“I’m happy with finishing as runner up. I must be honest: with two DNFs this year, it’s a great result to be second overall and I would like to thank the team for all the work done with the bike and with my morale yesterday, which was pretty low. It’s all experience, a great race and a great comeback so we now look forward to the future”.

Click the button below to find out all the images of the #SuomyCrew during the weekend at LeMans circuit.