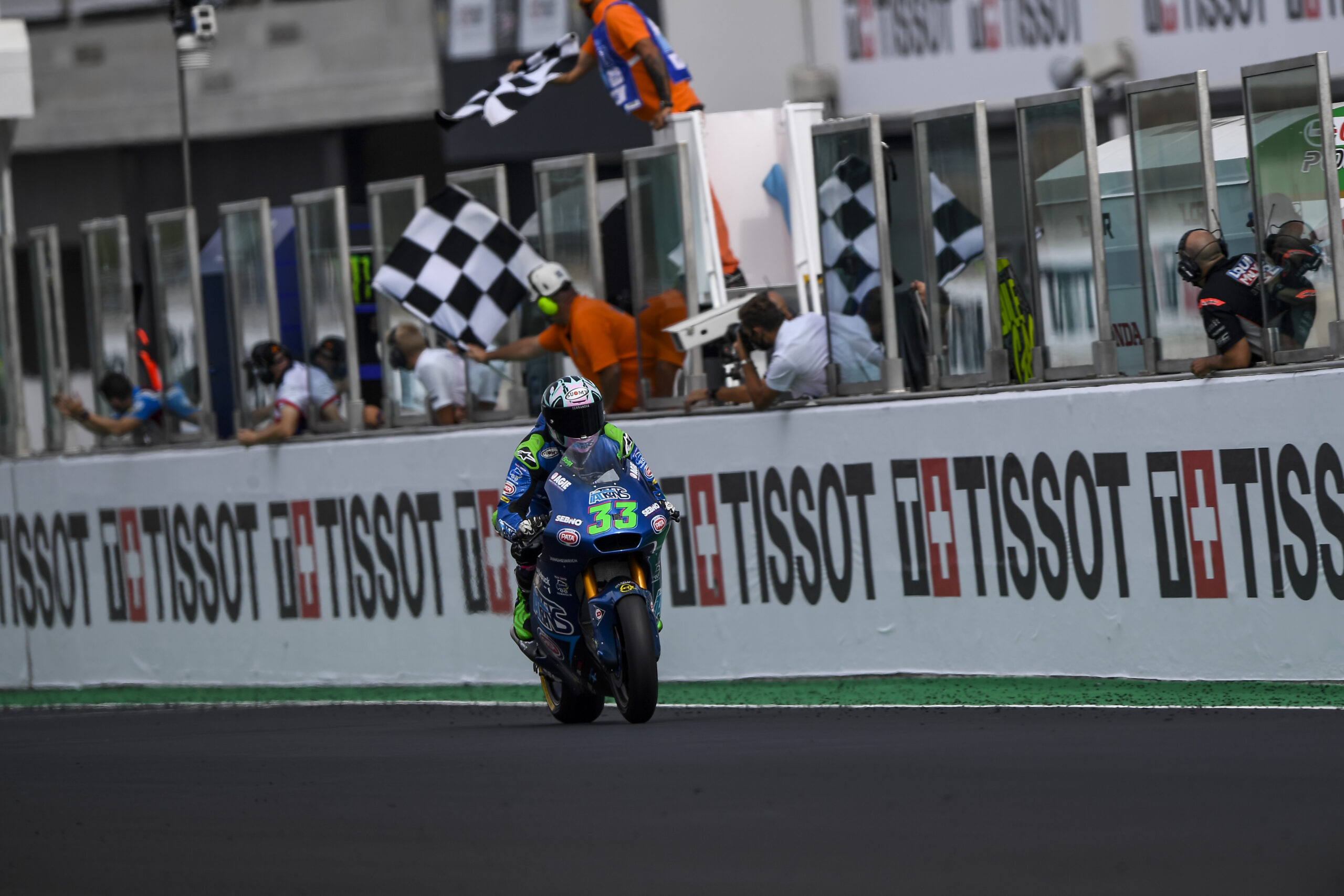 There is a bit of regret, after dreaming of seeing SR-GP on the top step of the podium in all four categories of the MotoGP World Championship hosted at the Misano World Circuit.

The first #EmiliaRomagnaGP could have marked a historic date for SUOMY, one of those days that repay all the difficult moments and that remain indelible in the memories.

It’s a pity for Pecco Bagnaia who, after dominating the MotoGP race for over 20 laps, is forced to stop his perfect race with seven laps from the end when an unexpected crash shatters the hope of an almost certain victory. You made a masterpiece, Pecco…you deserved to make yours this victory. But it will come, we have no doubt.

FRANCESCO BAGNAIA
“It’s a pity , we were very fast, I had a good gap from Maverick, I wasn’t at my limit, I felt that all was perfect with my bike. I managed the tires for the last laps because I know that Maverick is very fast in the last part of the race. At the corner six I crashed and I didn’t know the why. We studied the data and we saw that I didn’t do anything wrong, the lines were the same and the inclination too. We think that I touched something strange like in that corner, we don’t know what it was, but there was something that dropped me. I was very sure while I rode, I managed the race lap by lap and I didn’t need to be aggressive with the tires. I’m looking forward to being in Barcelona in one week because we want to bounce back”.

An uphill weekend for Andrea Dovizioso, who after starting from tenth on the grid, can’t make his way through and remains behind the leading group. Dovi, after a few laps, manages to find a good pace and recovers to get back into the top ten. Eight at the finish line, Andrea earns valuable points that keep him in the MotoGP championship lead with just one point on Quartararo and Vinales, who are second and third respectively.

ANDREA DOVIZIOSO
“It was a complicated race. Unfortunately, when you start from the back, there is always the risk of wasting time, especially in the first laps. After the start there was a bit of confusion: at Turn 8 two riders fell in front of me and I had to brake, leaving room for two other opponents who overtook me. After a few laps, I finally found my rhythm, and I just thought about trying to stay constant. I felt better than last week, but I didn’t have a great pace and being so far behind, I couldn’t do any strategy. In the end, today we scored some points, and for now, we are still leading the standings, but of course, we cannot be satisfied with today’s result.”

But it is still an unforgettable Sunday, the one that the youngest #SuomyRiders give us, who conquered the top in all the other classes, bringing SR-GP where it deserves: at first place.

The day is inaugurated by Matteo Ferrari who, after the podium he achieved at round one rode on Saturday, starts from third position on the grid and immediately establishes himself as the leader of the second race of the weekend, crossing the finish line in first place which guarantees him also the head of the world ranking MotoE.

“It was hard, especially at the beginning because Domi had a great start. After the MotoGP warm-up I knew the track had more grip and I was feeling comfortable. After Aegerter’s crash I kept my pace and it all went well! I must thank my team, because we watched back race one and in particular the last lap, and today I was ready to close all doors if it would have been necessary”.

Romano Fenati is finally back among the Moto3 top riders, after a difficult first part of the season, conquering a well deserved victory. Fighting with the leading group since the first laps, Romano is able to take advantage on the final lap, taking the checkered flag to win. This victory highlights the amazing experience of the rider from Ascoli, who finally smiled again.

ROMANO FENATI
“I am really happy about this race but I am aware of the fact that we have to continue to express ourselves in this way. It is necessary to remain focused on the goal. It has improved a lot the feeling with the bike and also for this reason I am very satisfied”.

Enea Bastianini continues to show us all his talent. Once again he is capable of being the absolute protagonist of a double race interrupted by the red flag due to the weather conditions. Leading from the first corners, Enea try to escape, accumulating an advantage that guarantees him the third victory of the season and consolidates his second position in the championship, just 5 points behind the leader.

“What a race! I’m very happy because winning at home in front of my family and my fans has a special taste. In the first part I had a good pace and also in race 2 I was pushing: I chose a softer tyre, but after a couple of laps it started to drop and I thought the other riders were catching me. I pushed again and in the end I won. Thanks to the whole team and Italtrans for the great job!”.

Positive results also for Nicolò Bulega and Stefano Manzi, who finished the #HomeGP in the top-15, respectively in eleventh and fifteenth place.

NICOLO’ BULEGA
“I wasn’t feeling too comfortable at the start of the race with the full tank and the early laps were not as quick as I’d have liked. In the end we got a decent result that shows our growth, but it’s still not enough”.

STEFANO MANZI
“Due to the continuous restarting, it was a strange race. Once we restarted it turned into a sprint-race and that made the other riders much more aggressive and rash in order to take a good position. In the group we battled a lot, I took some shots myself between the first and second lap. That made me lose valuable and precious time. I’m happy for the point, but we could have done a better result in the end”.

A beautiful Sunday for Suomy who sees its talents fighting for three world titles: MotoGP, Moto2 and MotoE.

Click the button below to find out all the images of the #SuomyCrew during the weekend at Misano circuit.