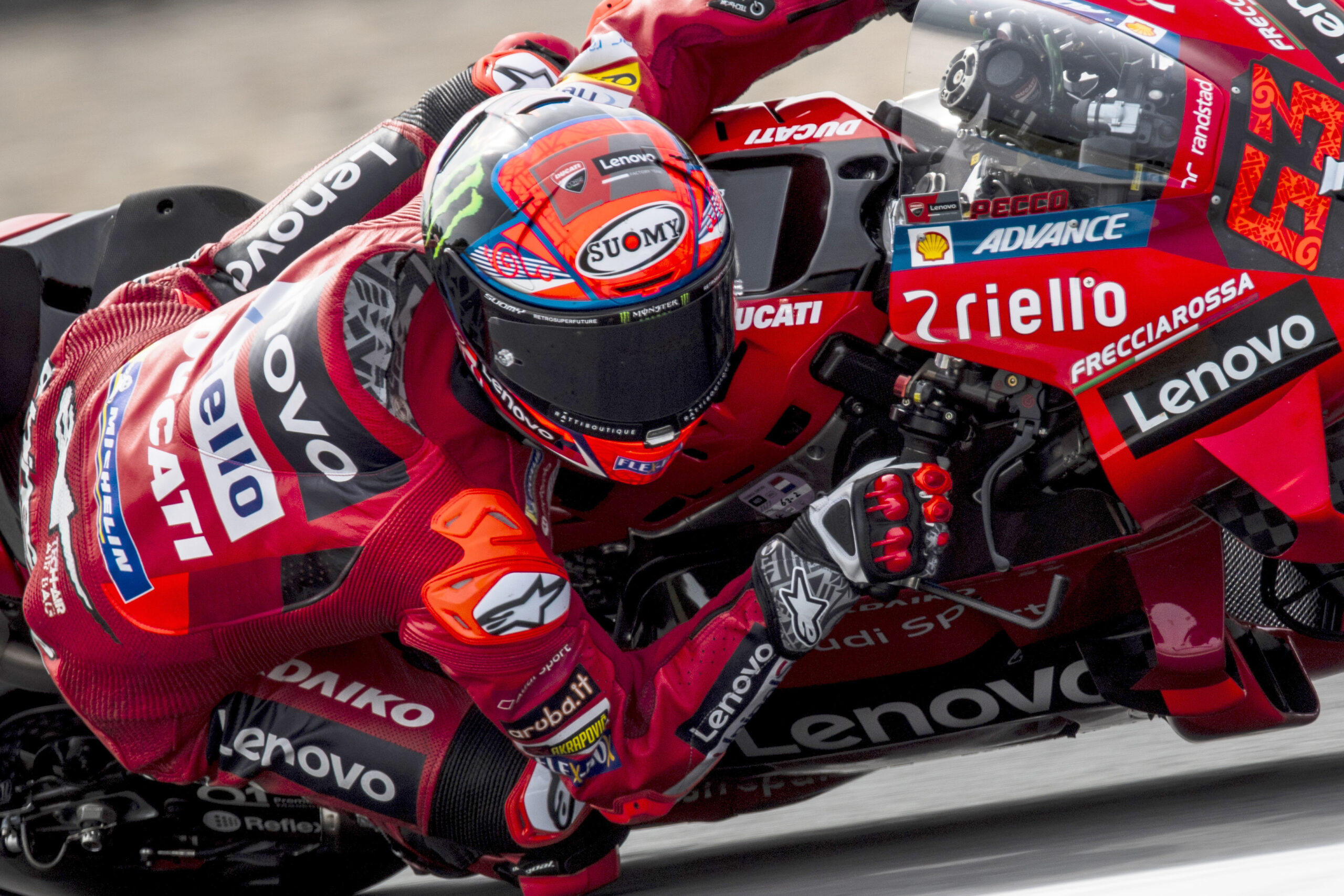 Ninth round of the 2021 MotoGP season in Assen.
Pecco Bagnaia finished the Dutch Grand Prix in sixth place. Starting from the front row with the third fastest time, he managed to take the lead immediately. Forced to serve a “long lap penalty”, he still managed to climb up to sixth position and earn valuable points for the championship by occupying the third position in the overall standings.

“Today has probably been one of the most difficult races I’ve ever had in MotoGP. I tried hard to defend myself from Fabio, but it was clear I couldn’t stay with him when he passed me. In the first part of the circuit, I made up some ground, but I lost a lot from him in the last sector. It was hard fighting with Nakagami too. In my attempt to defend myself, I exceeded the track limits twice and had to serve a long lap penalty. At that point, it wasn’t easy to make up positions. I apologise to my team for this mistake, which I could have avoided, but today I really gave it all to try and bring home as many points as possible”.

Enea Bastianini, who started 19th, managed to climb up some positions and cross the finish line fifteenth, thus placing himself in 16th place in the general classification.

“It was a good race, but I spent a lot of energy, and it was hard to get to the end. In the early stages I lost some time, but when I relaxed and let go, I felt more comfortable. We didn’t have a bad race, we probably need to improve a bit to find the limit of this bike. Now we have a few weeks to rest and to train because MotoGP is very tiring, both physically and mentally.”

Nicolò Bulega, who started 26th on the grid, due to a problem at turn 5 where the neutral gear made him lose precious seconds, he finished 19th.

“Unfortunately, our weekend was ruined in qualifying. Our starting position did not allow us to put up a fight. Our pace was not bad, and without that gearbox issue especially at turn five, we could have been in the top 15.”

Great Romano!
Third with a double Long Lap Penalty, Romano Fenati always took the lead in the race very quickly, after every penalty. In the Championship standings he took back the fourth position with 80 points, congratulations!

“I’m enjoying the moment! Yesterday and Friday I felt strong on the bike, so after the second penalty on the long lap I pushed to the limit and did a lot of overtaking. In the end, the bike was perfect, even if the tire drop was a bit excessive. This podium is like a win for me, as I achieved this by serving two Long Lap Penalties. I go on vacation with a smile on my face. Sergio Garcia was very fast, although I think the Best Rider today was Dennis, who stayed in first position for most of the race laps. For the next races I hope to stay on the podium so that I can fight for the Championship. It was not easy to start in Qatar with the penalty and when we returned to Europe in Portimao it was not as we expected, but in any case we started the season stronger than last year.”

In MotoE Matteo Ferrari finds the best position of the season with the fourth place in Assen, conquering 13 important points that bring him seventh in the standings.

“At the start some riders blocked the line in front of me and I lost some positions – and almost crashed out of the race. It took me a while to pass Okubo, but I had the pace to stay with the leaders so today’s race is definitely a positive one. Too bad for the start, because otherwise we would have been up there fighting for the podium.”

Next Round: Motul TT Assen, The Netherlands, 27 June

Click the button below to find out all the images of the #SuomyCrew during the weekend at Assen circuit.