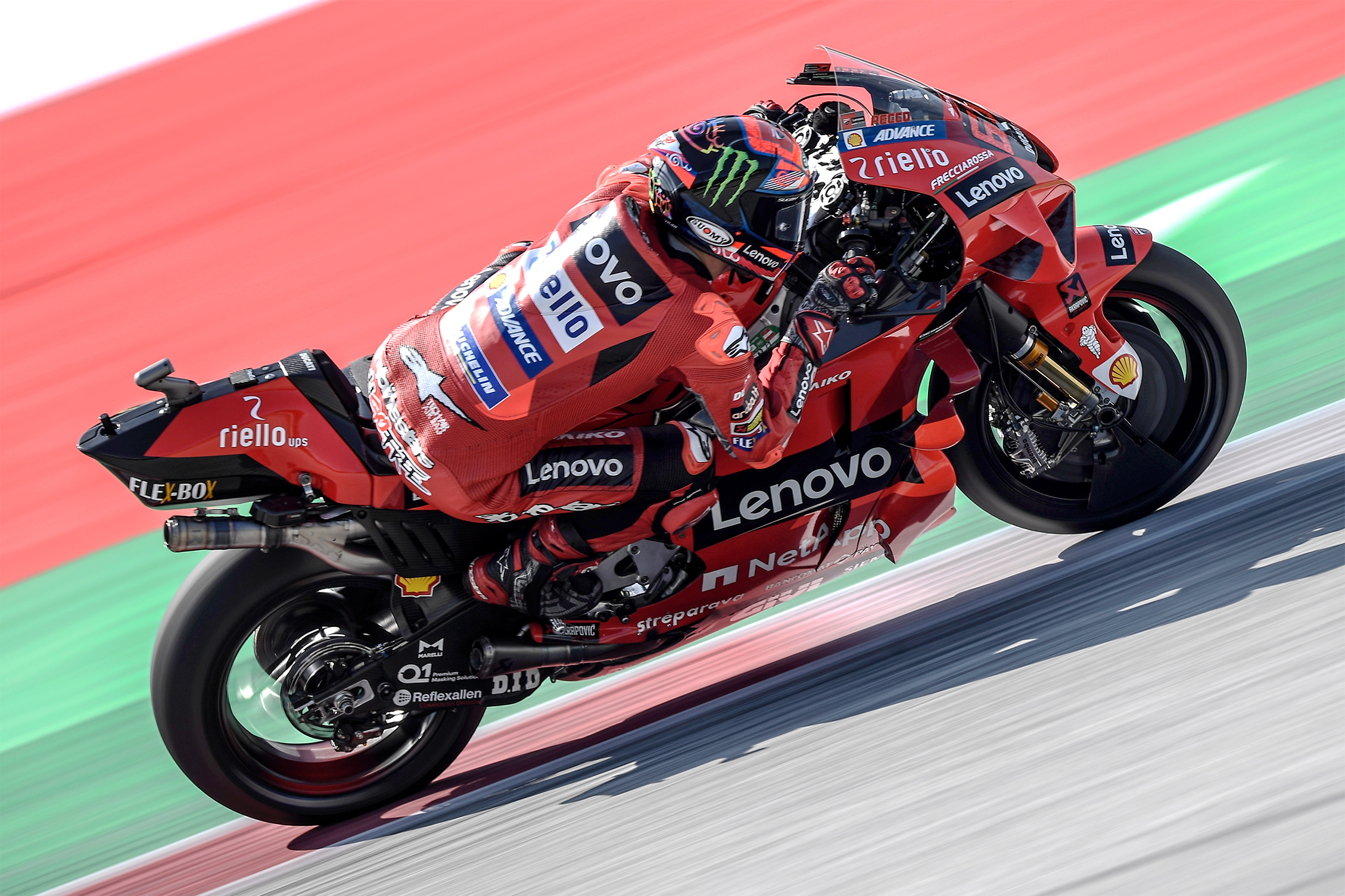 Eleventh round of the 2021 MotoGP season in Austria: race conditioned by the rain, which wet the asphalt in the final laps.
Francesco Bagnaia took an excellent second place.
Starting from the front row with the third time, Pecco immediately moved to first position, remaining in the lead for 23 laps. When the rain began to fall, he changed the bike and re-entered the race in eleventh position, recovering up to second place in just one lap and thus conquering his fourth podium of the season. Thanks to this result, Pecco also climbs to second position in the general classification. Congrats!

“Again, today we went close to winning, but I’m still happy! We did our best and worked really well. Both when I was leading in the dry and the wet, we managed the situation well. I let Márquez through when I saw the first drops of rain, to see what he would do because I didn’t know if I should go back and change the bike. I saw that many riders didn’t stop, and I thought I had made a mistake by doing the flag-to-flag. After the first lap on the rain tyres, I found my rhythm and was able to pass a lot of riders to take second place. We will try again! The next race is at Silverstone, and I’m sure we can fight for a good result there too!”

Enea Bastianini had to retire due to technical problems. On the sixth lap, the fairing of his bike came off and he was unable to finish the race.

“Unfortunately the bike fairing broke and I don’t know why. It’s frustrating because we were competitive and I think we could have had a good result, because yesterday in FP4 I had a very consistent pace. I hope that in the next races we will have more luck. I’m sure that sooner or later, luck will be on our side and we can get the results we deserve.”

Unfortunately, no points for Nicolò Bulega, who reached the finish line 22nd..

“We struggled a lot in this heat. Unfortunately, I had absolutely no feeling with the front and both entering and exiting corners we had big problems. Fortunately we are moving to a track like Silverstone which I like much more and is better suited to my riding “

Fifth place for Romano Fenati who, starting from pole, remained in the leading positions for all 23 laps, leading the race at various times. In the final laps, when the tire wore out, Romano lost a bit of feeling with the bike, which didn’t allow him to fight for the podium.

“I am not 100% happy! After two races in the last two weekends in the leading group and a podium I cannot be unhappy, but I am not satisfied with today’s race , since we worked hard and we could do better. For the next round we have to improve in order to gain the maximum amount of points possible.”

In the five-lap sprint race (due to the risk of rain) Matteo Ferrari lost many positions during the first lap and had no time to put together a comeback. The eight points collected today leave him 32 points from the top of the standings.

“It was a difficult race. We had to put on fresh slick tyres on the grid and the feeling with the bike was nonexistent. We didn’t even have a fully-dry set up, which didn’t help. We made up a couple of places in the standings with today’s eighth position, but now we can only aim at finishing the season in a good place at Misano. It’s a pity, because we could have won.”

Next Round: British Grand Prix, 29 August

Click the button below to find out all the images of the #SuomyCrew during the weekend at Spielberg circuit.