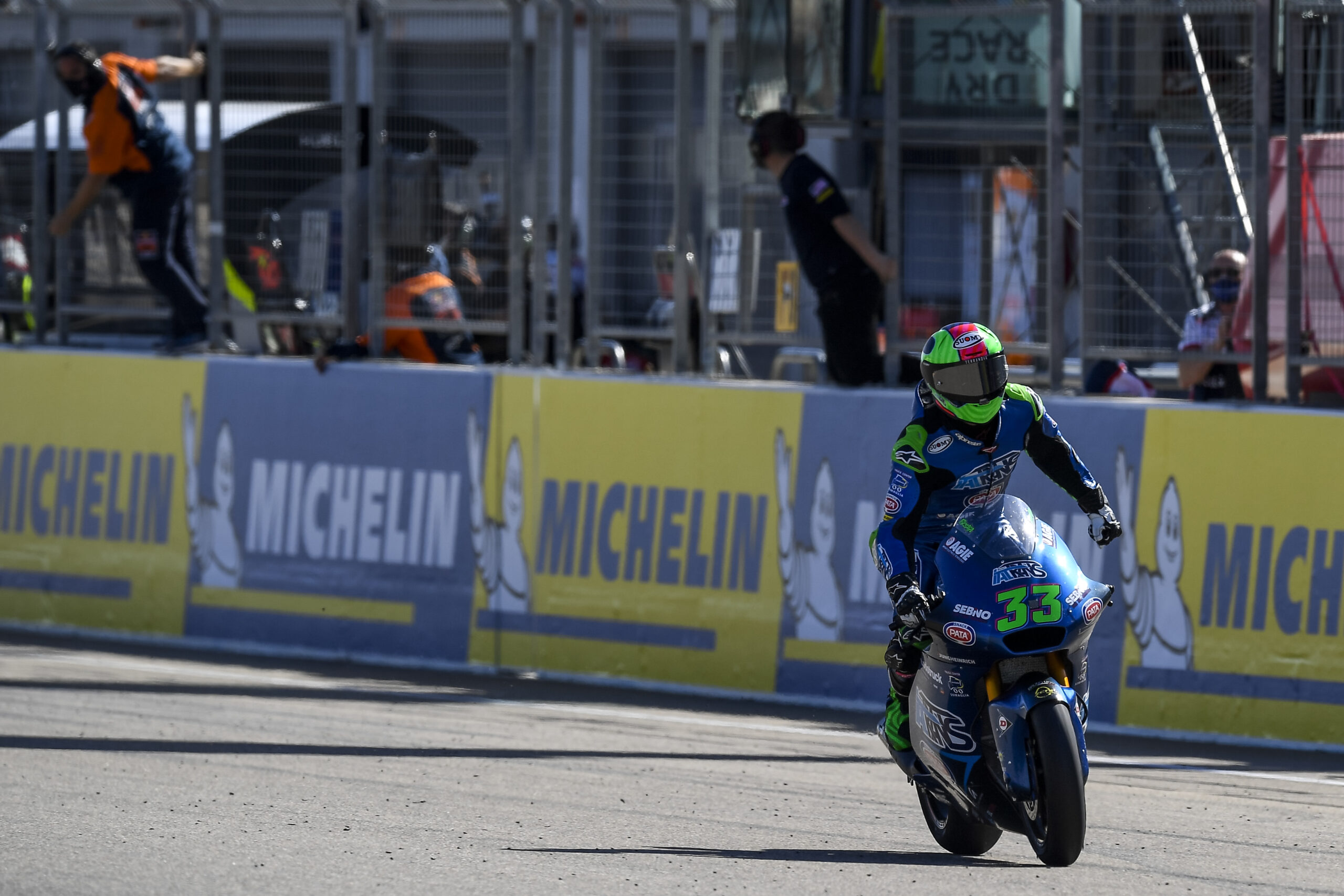 The MotoGP World Championship lands in Spain, for the AragonGP, the first of two consecutive events scheduled for this 2020 season at the Motorland Circuit in Alcaniz, Spain.

Our Romano Fenati seems to have finally found the right balance, becoming one of the main actors since the first free practice sessions of the Moto3. Starting from sixth position on the grid, Romano immediately gains the leading group, fighting until the last corner for the podium, which he loses only for a few tenth of a second. An excellent fourth place for Romano, which represents an important starting point for next week’s race.

ROMANO FENATI
“It has been a really good race for us. We have to make some adjustments for the next race, but in the end it was not so bad. We lost a bit in the final, due to a drop in tire performance, so we have to work to improve performance at the end of the race.”

Alien = habitant of another planet, who is different compared to an environment, to a social context.
The alien is the mascot drawn on Enea Bastianini’s SR-GP who, today more than ever, performed this sci-fi character. Enea, who started from twelfth place, as soon as the lights went out, was able to immediately find his pace and, lap after lap, climbed up the rankings. An incredible comeback, like a real extraterrestrial, a comeback that leads him to cross the finish line in second place. A fundamental result above all because Enea now returns to be the leader of the Moto2 world rankings, with an advantage of two points.

“What a day! I didn’t expect this result because I started from 12th on the grid. I didn’t have a great feeling with the bike this weekend, but we worked well in the warm up and in the race I managed to be aggressive and constant from the start, winning the podium. We also took the lead in the championship and this is an extraordinary result for the whole team. I hope to be fast again next weekend! ”.

Stefano Manzi finishes the race in the top-15, in fourteenth place.

STEFANO MANZI
“I struggled a bit on this circuit, all weekend. We’ve worked hard in order to improve the set-up, but we’ve still a lot to do. I tried to keep a good rhythm, but we could’ve gone even faster. It’s a pity, because at some point I was pretty constant, but the others started to speed up their times. I hoped in a better result, but we take this 14th place as a step of growth. We’ll work for do better, looking forward next week because we’ll be back on this track”.

Nicolò Bulega has to be satisfied with the eighteenth position.

NICOLO’ BULEGA
“It was hard to do any better after starting from so far back. We have done some miles, which is something we lacked throughout the weekend and we gathered some important data ahead of the next race here at MotorLand. We are all expecting more from ourselves and we want to do better from Friday.”

Our talents of the MotoGP class have had a more difficult weekend, since the first practice session, but above all during the qualifying.

Francesco Bagnaia struggles to find grip on the Spanish track, missing out the access to Q2 as well as Andrea Dovizioso, who misses the possibility of achieving an important position on the grid fade for only 15 thousandths.

Starting respectively from the fifth and sixth row, Andrea and Pecco know they have to make a great start, to have the concrete possibility of bringing home a good result.

Dovi gets off from thirteenth on the grid, he has a great start and he is able to make up five places after just a few corners. Eight at the end of the first lap, Andrea manages to rejoin the fight for the sixth position. Dovi closes the round in seventh place, managing to keep himself in the fight for the title as he is now fourth in the standings just 15 points off the new leader.

“Today we managed to achieve the best possible result considering that we were starting just thirteenth on the grid. Unfortunately, we did not have the speed to fight with the front riders, and maybe, with the highest temperatures compared to the last few days, the medium tyre didn’t behave exactly as we expected. Surely, now we have some data to work on ahead of the next race weekend, which will always be here in Aragón. We hope that the weather conditions will allow us to start working consistently, starting immediately from the first free practice session on Friday”.

It was a difficult race for Pecco who, after finding a good feeling with the bike, crashed at turn five on the third lap ending his race prematurely.

FRANCESCO BAGNAIA
“I’m sorry because I finally found the right feeling, I felt good and unfortunately crashing after only 3 laps is always bad, I’m sure we could have made a good recovery. When I crashed, the feeling was that someone had touched me but actually from the data it seems that the gear did not go well, we will try again next week”.

Click the button below to find out all the images of the #SuomyCrew during the weekend at Aragon circuit.