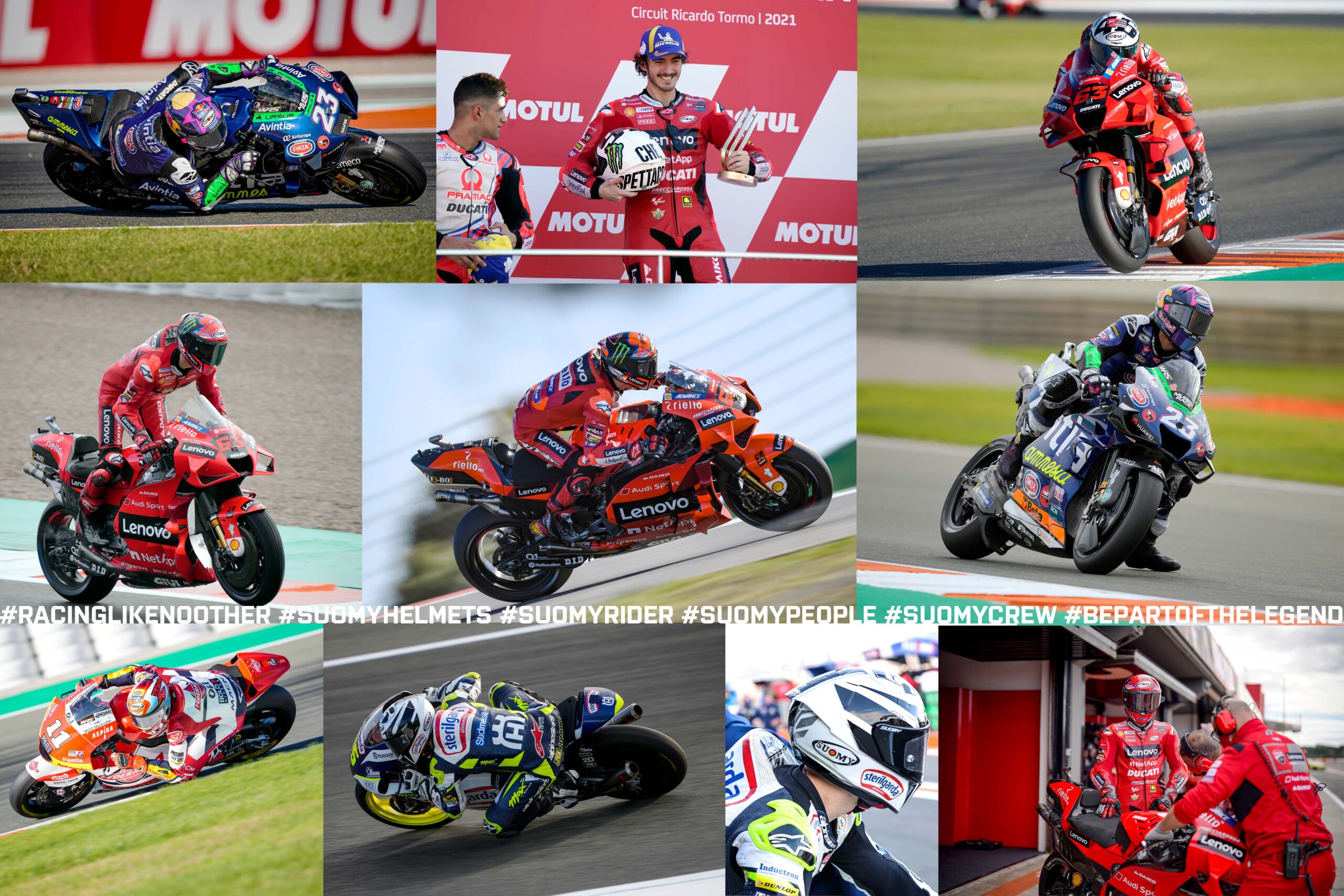 Spectacular Pecco! In the festive but also a bit melancholy atmosphere of Valentino Rossi’s last race, the MotoGP season ends, and Pecco ends it with a flourish with another victory, and the fourth pole in six races!
Pecco achieved his fourth success of the season and his second consecutive victory thanks to a perfect race, a tenacious comeback from second position on the grid and a solo to the finish line: congratulations Pecco!
A satisfaction for #Suomy and # SR-GP, the performance helmet worn by champions who know how to exploit and enhance its unique characteristics of comfort, visibility and aerodynamics.

“I’m thrilled with the victory today. To win wearing Valentino Rossi’s helmet was incredible and the best way to celebrate his last race. Today’s success was incredible, and now we know we are ready to fight for the riders’ title next year. During this season, we have improved the bike’s setup race after race, and at the end of 2021, the Desmosedici GP has become very strong, as well as its riders. We have a very good base for next year, and I hope to start as we finish. We have gained a lot of experience, and we have grown a lot! The team is unbelievable, and the atmosphere inside the garage is amazing! I’m really happy, and I thank Ducati for all this”.

Enea Bastianini crossed the finish line in eighth position. The Avintia Esponsorama Racing rider closes a great rookie year with two podiums and an 11th place in the MotoGP world rankings with 102 points.

“I am happy with the race. I was able to overtake a lot, we showed a good pace and we got back to the speed we lacked yesterday. We didn’t get the rookie of the year, but it was more important for me to be fast and have a good race. Congratulations to Jorge for getting it, he did a great job but I would have liked to fight on equal terms.”

Nicolò Bulega closes his season with a 24th place. For him 12 points this season and 26th place in the overall standings.

“It’s been a very difficult season and this weekend was no exception. We were never competitive and it’s a shame, as I wanted to finish with a good result. I would like to thank the whole Gresini team for these seasons together, it was a good journey.”

The 2021 season for Romano Fenati ends with the fifth position in the Moto3 World Championship standings. The last race saw Romano cross the line in twelfth position. After 18 races, 160 points have been earned, with 1 victory, 1 second, two third places and 3 Poles to the credit. Thanks to the Poles conquered Romano wins the Poles Record in this Championship: congratulations!

“I am happy to end this year and to say that these two years with this team have been amazing. I learnt a lot, probably I learnt more in these two year than in the rest of my carrier. I am happy to move on and to compete in Moto2. I am not happy with the result obtained today, but for me it is fine, because it is not important the position, since now I have to focus on the Moto2. It would have been important to win or to reach the podium for the team. Now we will enjoy a dinner together to celebrate the year and then we will have fun at the gala.”

It’s been a fantastic season, thanks to all the #SuomyRiders, and see you next time!

Click the button below to find out all the images of the #SuomyCrew during the weekend at Valencia.