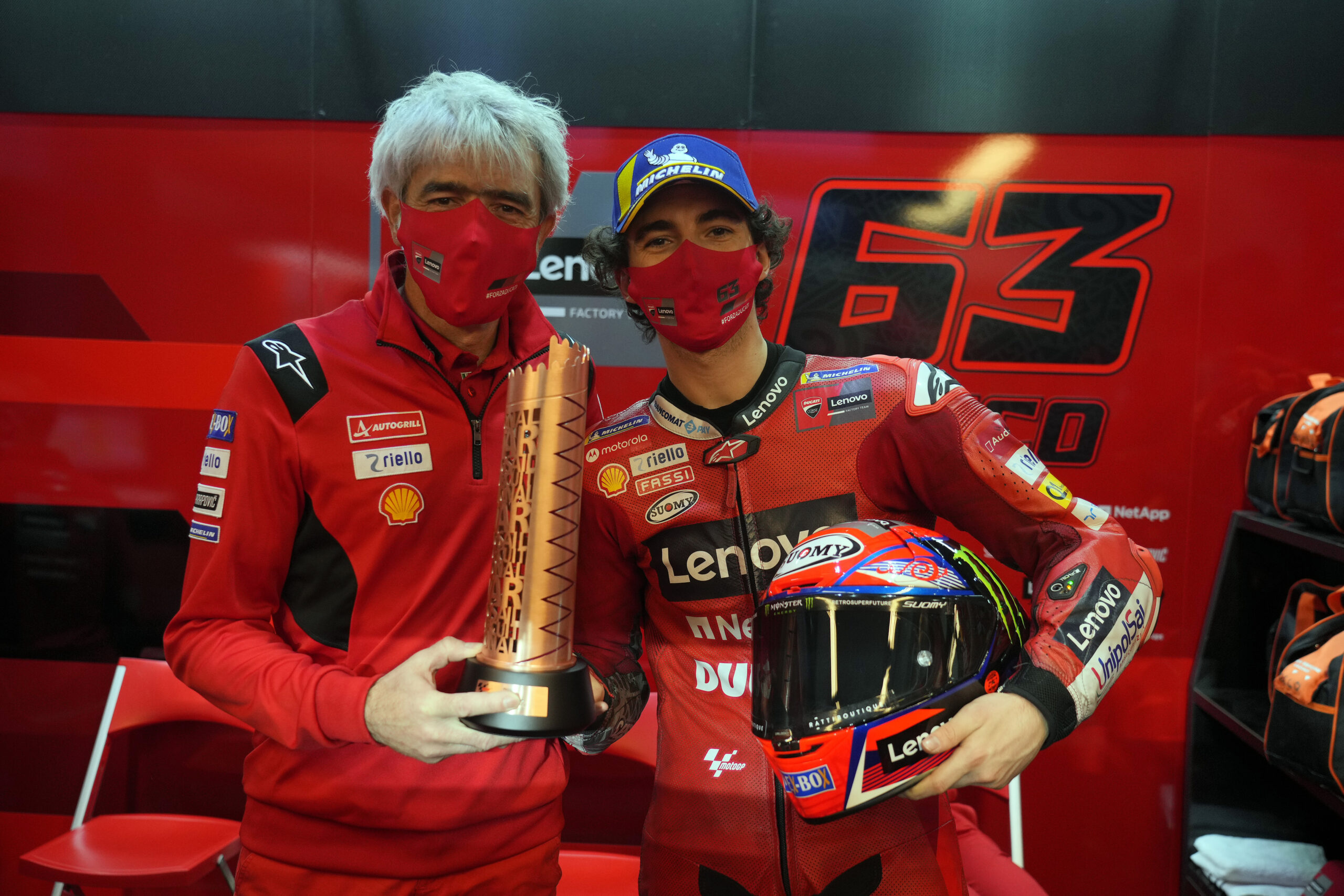 Very exciting days for our #SuomyRiders, especially for Francesco Bagnaia who conquered the third podium step in the first event of MotoGP 2021 season at Losail International Circuit, near Doha.

After an amazing start from pole position, in the first three lap he maintains the first position ahead of his teammate Miller and of the Ducati of Zarco and Martin.

He remained in the lead for half race, going back from fourth position to third in a few laps to go, conquering the third podium step in a sprint.

Intense first race and great rookie for Enea Bastianini who nearly touch Q2, missing for only 5 thousandths: the rider realized a fast lap in 1’53,733 which permit him to start at 13th position in starting grid.

At the end of the first lap, he was in 19th position but then he recover up to 10th position, finishing less than 10 seconds from the winner.

“I’m very happy to begin the season with a podium: in was my first race with Ducati Lenovo Team and I arrived from a difficult final season in 2020.

Today I’ve tried in every way to maintain the lead and close Viñales. Unfortunately, I think that I used a wrong strategy because I’ve worned out the tires too much at the beginning. After 7 laps I started to sweat a lot, in particular at the rear and this also because for the race conditions that today was different from other days. Luckily we have another race in Qatar so we will try again next week.”

“It’s an incredible result. At the beginning I didn’t activate the holeshot, I’ve sprinted very badly. In first laps I tried to get into the swing and was very strange being with others with a powerful bike. After 4-5 laps I’ve started to push more, I made some good overtaking but in last six steps I had hurt my arms and my only thought was to finish the race.”

In Moto2 great free practice for Nicolò Bulega, starting from 11th position at starting grid: good start, but some problems probably at the rear tire take him to finished in 22th position. For the number 11 there’s another opportunity to remake himself on the same race in less than a week for #DohaGP.

“Not much to say, we sweated from starting and unfortunately we have not been able to find the right step in that conditions. We are analyzing datas but probably we was betrayed from a problem at the rear tire. We have to lower the head and work hard, the schedule give us the possibility to remain here. Next week end will be different.”

A very strong wind welcomed Moto3 racer at starting grid. Gusts with top speed of about 40 km/h, created some problems since warm up. Romano Fenati started from 18th position. Unfortunately Romano was stumbled in a jump start and for that he receive a double long lap penalty. For that penalty he lose about 5 seconds, but without losing heart the rider starting a recovery, reducing step by step the distance with the head of the race and with the achievement of 11th position, with 2.316 s from the winner.

“During the race I’ve drive so fast and the bike especially was too fast and I’m happy for that. I’m sad for two long lap penalty because I think that I didn’t anticipate the start. For that we will make a check with racing management. I’m sure that next week we will be very competitive.”

Click the button below to find out all the images of the #SuomyCrew during the weekend at Losail circuit.