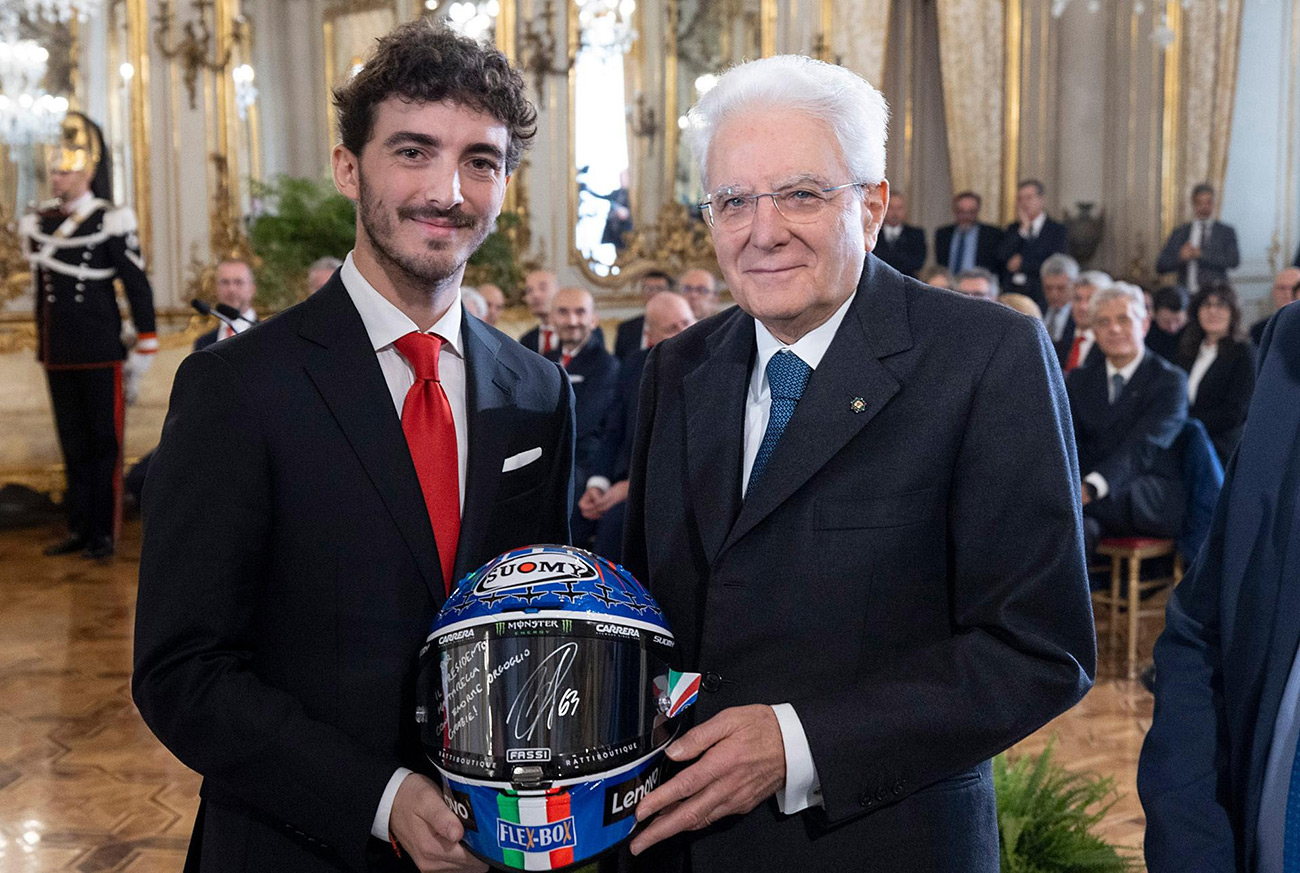 The celebrations continue for the MotoGP World Champion Francesco “Pecco” Bagnaia, who on 16th November was received at the Quirinale Palace by the President of the Republic Sergio Mattarella.

An event that will remain in the history of the Italian motorcycling, to which took part not only to the representatives of the Ducati Corse Team, but also the president of CONI Giovanni Malagò, the FMI President Giovanni Copioli, the Minister of Youth and Sports Andrea Abodi and the President of the Emilia-Romagna Region Stefano Bonaccini.

A great honor for Pecco to be received by the President of the Republic himself, who, about a year after Valentino Rossi and Antonio Cairoli’s visit to the Quirinale, once again demonstrates how much he values Italian sport.

With regard to the victory of the 2022 MotoGP World Championship, our Suomy rider reveals
“This year we managed to obtain an extraordinary result, of which we are very proud: we won the MotoGP World Championship as an Italian rider on an Italian motorbike, 50 years after Giacomo Agostini’s last victory in the World Championship on MV Agusta. This victory is the result of many years of hard work, both by me personally and by the whole team. Together we managed to improve our bike to make it the benchmark of the championship, and we must be proud of this. After crossing the finish line in Valencia two weeks ago, I completed the last meters proudly carrying our flag, aware of having demonstrated to the whole world that the talent and ingenuity of us Italians are not second to none.”

On the occasion of the meeting, Pecco donated an autographed Suomy helmet to the President of the Republic.

It is no coincidence that our Suomy rider has chosen to give Sergio Mattarella the helmet with the graphic worn at the Mugello Italian Grand Prix held in May, with which Pecco had achieved a sensational victory and paid tribute to three Italian excellences: Ducati, the Frecce Tricolori and the Italian Air Force.

Finally, Suomy seizes the opportunity to express our warmest thanks  to Francesco Bagnaia and the Ducati Corse Team for giving our brand the invaluable chance to be present before the highest Italian office.