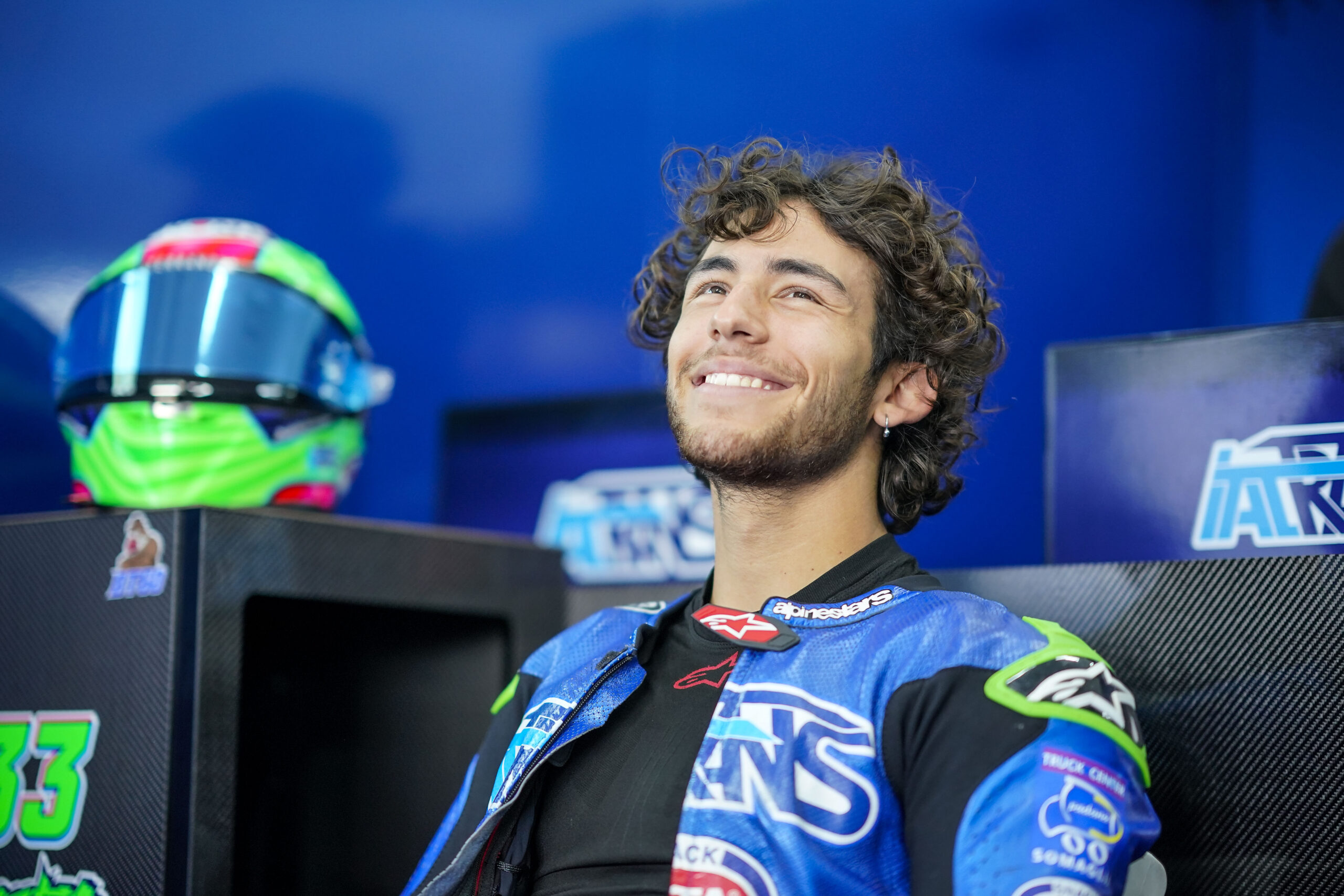 Valencia Grand Prix between lights and shadows for the #SuomyRiders, on track at the Ricardo Tormo Circuit for the 14th and next to last round of the season.

Arriving at this second consecutive round on the Spanish track as leader of the Moto2 World Championship, Enea Bastianini raced with concentration, strategy and heart, confirming the leadership of the standings.
His race was conditioned by a tough qualifying, starting from the fourth row of the grid with the 12th time and out of the fight for the podium. Already in the top ten at the end of lap 1, Bastianini set a great pace of 1’35” for the whole race and finished 6th.

A solid race at the end of which he is even more leader of the Moto2 World Championship 14 points ahead from the first contender. The final challenge will be next weekend at Portimao.

“Positive race even though we suffered at T4 all weekend long. We scored important points for the standings, but we could do something more. We are still leaders and now we have to be focused for the next challenge in Portimao”.

Nicolò Bulega has scored another top ten finish. A ninth place in the #ValenciaGP for the young Italian rider, who is building a solid base for 2021.

NICOLO’ BULEGA
“We’ve scored another good result and I’m quite happy. We need to keep this approach to races and approach to work, which is finally bearing fruits. Now comes Portimao, where we’ve never raced before, and we’ll try to wrap up this 2020 the best way possible.”

A Sunday to archive for Stefano Manzi who, after the first pole position of his career and track record conquered on Saturday, was able to run a good, solid race for almost 10 laps. He was very close to the top-3 positions and was showing a good pace. During the 11th lap, unfortunately, he swiped at turn 2 and was forced to quit the race.

STEFANO MANZI
“It’s really a shame that a race like this one, in which I started very well, has to end in that way. With this windy weather conditions our aerodynamics struggled a bit so I couldn’t go fast as yesterday. I, then, started to high the pace in order to conquer a good final position but, unfortunately, I swiped. And has been a very unexpected incident, especially for the way it was going. I’m very sorry”.

In Moto3, starting from the fourteenth position, Romano Fenati had some issues with his bike that prevented him from showing off his strength points, finishing the race in twelfth place.

ROMANO FENATI
“I am not very satisfied with the race outcome, since on the straight line, I have not been fast as I was in the free practice. Unfortunately we had a problem, for which we are still doing some verifications. The setting was perfect and in my opinion we could have done a good race. A real shame, but we have to think positive for the next race. Portimao will be a new track for me. From the videos and the images it seems beautiful. We hope to do a good result there.”

In the Premier Class Andrea Dovizioso was the protagonist of a good comeback, as he crossed the finish line in eighth place, despite having started from the sixth row of the grid. After a good start, which allowed him to recover some positions immediately, Dovi was able to lap consistently managing to pass several riders to cross the line in eighth place.

“I am quite satisfied with today’s result, considering that I started from seventeenth on the grid. Today we could have done more, seeing that Jack Miller was able to bring his Ducati on the podium, but unfortunately in the final laps, I had a problem with the left handlebar, and I couldn’t ride as I wanted. I’m disappointed, because now the fight for the remaining positions on the championship rostrum becomes more difficult, but there’s still one race left, and we’ll fight till the end. I want to congratulate Joan Mir on winning his first MotoGP World Title because he 100% deserved it!”

On the other side Pecco Bagnaia, who started from eighth position, due to a lack of grip, wasn’t able to find his race pace to fight for the important positions. Pecco closed in eleventh place.

FRANCESCO BAGNAIA
“It was not the race I expected. Until this morning we were strong and competitive, we had a good pace – we had everything working for us to do a good race. Today was essential for me to finish the race today after not finishing the last 3 consecutive races, but we were in trouble and we did not expect it. The only “salvation” was to put the hard tire at the front to compensate as much as possible the lack of grip at the rear”.

Click the button below to find out all the images of the #SuomyCrew during the weekend at Valencia circuit.